The word broken means a lot more than I thought it did.

I’ve always thought of broken as not working and not fixable. Like a mirror – once it’s broken, it’s done. Nothing but an annoying thing you need to clean up (as you’re trying not to cut yourself) and throw away.

But according to dictionary.com, broken actually has a lot of definitions.

Broken is not the end.

Broken is when your life changes direction abruptly.

Broken is how you might describe the flow of things when your life is interrupted.

Broken is fragmented thoughts and feelings you struggle to pull together, because you’re disconnected from who and/or what you used to be.

Broken is when life isn’t smooth.

Broken is not the end.

I keep coming back to the sky cover reference for broken: “being more than half, but not totally, covered by clouds.” That’s what life has been like for a little while now. The dark and angry storm clouds have cleared out and we’re in a weather pattern that is party cloudy – or perhaps partly sunny is the better way to look at it. (Why the heck don’t we say partly sunny?)

Days are filled with normal things like camp and dinner time and play and work and tickling and fart jokes and board games. Days are filled with happy moments. But here and there, our days have moments of sadness or anger or melancholy. Sometimes our days have many of those moments. Because things that used to function how we liked don’t function that way anymore. Because we face situations and people that challenge us. Because some of the pictures that used to hang in our house don’t hang here anymore, because some of the people that used to live here don’t live here anymore.

I love to take pictures. I so love pictures that I still have hundreds of 4 by 6’s printed each year and I meticulously place them in order in old-fashioned tangible photo albums for each of the girls. Pictures tell our story. Pictures help us to remember events and moments.

But when we share pictures online, we are telling a fragmented story – a broken story. And that’s because we tend to share only the pictures that show us happy and having fun. In part, we tell happy stories with our pictures because no one thinks to take pictures when they’re crying. And no one gets pictures of their family all shouting at one another as they try to figure out whose fault it really was that someone dropped the container of eggs. We often literally have no unhappy pictures. And frankly, no one really wants to see those pictures.

But we should see those not-so-perfect pictures, because that is real life.

Real life has brokenness. Every single one of us has days and lives filled with fragments of loving, smiley, happy, sad, angry, shouty, and cut-off-that-guy-in-traffic moments.

The girls and I love to play with Snapchat filters. If an alien 7 light years away finds our family photos 300 years from now, they are going to wonder what the heck kind of creatures we really were. One of their current filters is called Broken Mirror, which just struck me yesterday as the most “real” thing that I’ve ever seen on social media – showing ourselves fragmented. Showing ourselves broken.

My life has brokenness, and that’s OK.

That’s OK because broken is fixable.

And sometimes things that are broken end up contributing to a really awesome cake. 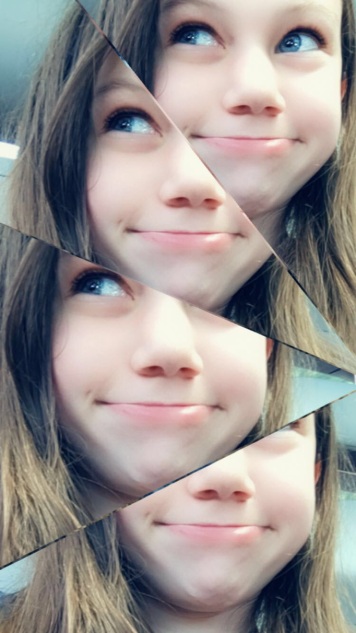 One thought on “Why don’t we say Partly Sunny?”