My first glimpse of truth was at a costume party. He took me to her house for the event, and the two of them enjoyed shots with neighbors and work pals while her husband and I watched them like they were our errant children, laughing about how they couldn’t hold their liquor and wouldn’t make it through the whole party. I’d planned to go as Poppy, the happy-go-lucky girl from the movie Trolls, but at the last minute decided instead to wear a costume I’d purchased for an office event. I was Alice, from Alice in Wonderland, in a big blue dress, properly pressed apron, and a little purse that looked like a clock.

The party was filled with happy people, all dressed up for fun. Neighbors and friends dressed as doctors and clowns and such. He was Batman – the costume of a character that lives two lives, who lost the most important people to him in his childhood and who fights to help others not suffer the same loss of family.

One of the funniest details in this wonderland/party story is that two people who hadn’t spoken to each other about costumes before that event were both dressed as characters from Alice in Wonderland. Me as Alice, with my proper white tights and Mary Janes. Her as an adult steampunky version of The White Rabbit, with bunny ears, leather short-shorts, and black fishnet stockings. It was so funny that people took our picture together – two characters from the same story, a contrast of light and dark. There might actually be more irony in our choice of costumes for that night than in all of Lewis Carroll’s writing.

I used was because it doesn’t matter anymore. I don’t care why people behaved the way they did, and even more than that I don’t believe in coincidences. I believe in divine intervention. Sometimes the seemingly awful things that happen to us end up being our salvation from things that will really harm us. And there are messages and lessons for us not just in what happened, but also in our surroundings at and in the details of those events.

Here’s the thing about Alice and The White Rabbit. In the end, after all the chaos and confusion, The White Rabbit is just a noisy trumpeter that’s a slave to others in a world of fantasy. But Alice…Alice separates herself and she runs away from all the dysfunction. Alice looks at that screaming mob that’s yelling at her and railing at her, and Alice focuses on the calm guidance of a doorway to peace – and then she wakes herself up.

Watch: Alice Wakes Herself Up 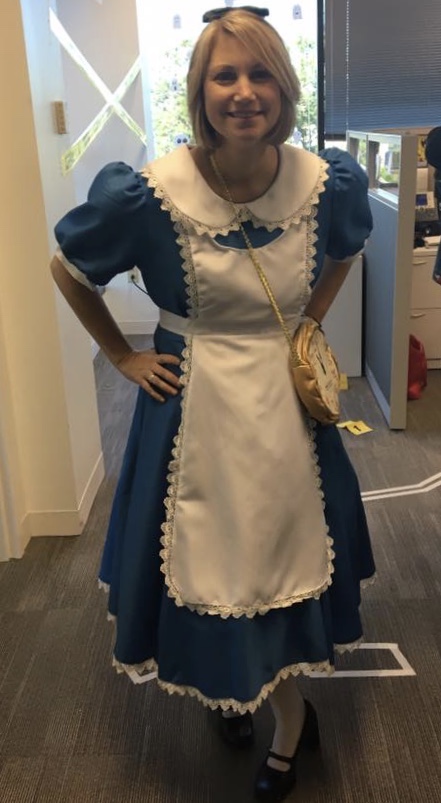 3 thoughts on “Alice in Wonderland”