I have always been drawn to strong women – the women in my family are strong, and without actively thinking about what I’ve done I’ve filled my life with gal pals who are all strong and I tend to focus on female candidates in the workplace who are strong. The women in my life have served as my compass my entire adult life. My true north.

Some of my family compass.

My Mama was bold in a time when it was more fashionable for women to be quiet and submissive, she worked while my Papa was fighting in WWII, she organized voting in her small town on election days, and she spent countless years leading church efforts to support people in her community. My great Aunt Jean worked at the local courthouse way before women in the daily workforce was generally accepted, back in the 1940s. I used to think because those women were set in their ways about some things that they were old-fashioned, but really nothing could be further from the truth. It’s only as I’ve gotten older that I’ve thought carefully about who they were as people – not just who they were in relation to me. These were women who were not afraid to stand up for themselves, they were women with opinions, they were women of faith, and they were women who didn’t just think about doing but who actually did. They were the perfect matriarchs to raise a family full of girls.

It frustrates me that in 2019 there are women who scowl at the word feminist. We don’t all have to agree on abortion in order to agree that jobs should be held by the best qualified people and that leadership at any company and in any country can proportionately reflect the constituency of that company or country. I don’t think men and women can all do all the same things, but I do think they should have the same chances to participate and excel in any arena.

It also frustrates me that even in 2019 so many of the qualities that I admire in women and men are looked at as positives when found in men but as negatives when found in women. Confidence. Strength. Belonging. Assertiveness. Courage. A sense of self-worth. A person who uses their voice and who advocates…If a woman stands up for herself or her family, or if she sets a boundary, she might be judged as being bitchy or controlling or entitled. As part of the same event or meeting or conversation a man does the same thing and his boundary or his confidence is not only looked upon as positive but is actually expected in order for him to appear manly.

And finally, it really frustrates me that the majority of the people I see scowling at the word feminism and scowling at women who are confident are other women. I’ve worked and worshipped and learned with thousands of men and women in my adult life, and I think if I lined up the people who I have seen hold women back or harshly judge women of strength, more than half of the people in that line would be women.

Why is that? My initial reaction when I think about that line of people is why are women so hard on women? But I think perhaps the more important question is why is anyone in that line – what do the people in that line have in common?

And the answer, I think, is insecurity. When you’re insecure, male or female, every one and every thing is a potential threat. And when people feel threatened or at risk, they will sometimes do anything possible to assert control in some area in hopes it will enable them to hide their weakness in another. The bottom line is that a confident and capable person is someone who can see and possibly expose another’s insecurity or weakness.

I have very big shoes to fill. One of my most important jobs is to shepherd two little girls into womanhood showing them what the women before and around me exhibited – thoughtfulness and kindness and empathy, confidence to lead, tenacity to ask for or demand or secure what they or their children need, bravery to sometimes stand alone without the accolades or approval of others, willingness to advocate for others who cannot advocate for themselves, and vulnerability to have faith. And I somehow have to do that while they are constantly bombarded with contrary images and examples – mean girls, selfie mavens, women who sleep with their boss, women who support misogynistic behaviors, people who can’t see past self.

One of my favorite feminists, who happens to be male and sometimes vote Republican, said something this week that stuck with me: “It doesn’t matter if people know WHO I am. It matters what lesson they learn from me.”

It matters what people learn from me. How I live matters because it is a constant lesson for my daughters.

That’s crazy and scary because I’m still learning with a very long way to go while little people are learning from me. How does that make sense?! It seems like the process would work better if adults did all the learning and then deposited that learning in kids after it was all gathered. When I was a kid, in my mind my Mama and my Aunt Jean were finished products, not works in progress. But 45-year-old me now knows that can’t have been true – they were clearly learning new things at the same time I was learning from them. They’re in heaven now but I still think about what they would say and do in my shoes, which not only means they are still a part of my compass but also that they are a part of the compass my girls will use. And that really makes me smile and gives me hope.

I’m a person who looks for signs. Maybe it’s superstitious and maybe it’s slightly crazy or maybe I’m just a heretic, but I’ve always thought that God sometimes reveals things to us – “talks” to us – through signs, and that the people who have passed before us – our great cloud of witnesses – encourage us and speak to us through signs. This week, walking through an antique store, I came across this little Studebaker stool. 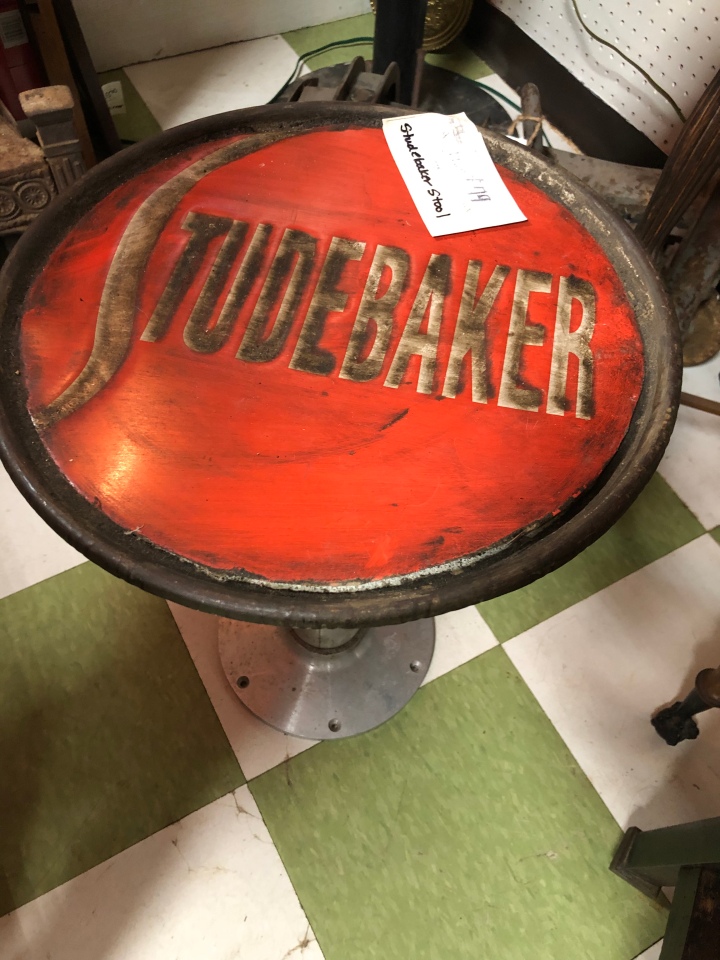 My great Aunt Jean and Uncle Dale loved and collected old cars, and when we were children my cousins and I rode in her blue Studebaker in small-town parades in Ohio. Maybe you could say I noticed the stool because I’d been thinking a lot about her recently, but you might also say it was Aunt Jean’s way of encouraging me, reminding me she’s still close.

I know she’s smiling down on us this morning, especially her Little Bit. Last night Audrey and I were up late and goofing off and then disorganized and then ate too much dessert and then exhausted. Way past bedtime we fell asleep within seconds of laying down, without saying our prayers. Not a shining Mommy example. This morning Audrey woke up as she normally does – she has no fogginess or process of waking up and pulling herself together for the day. She simply wakes up at 110%. She spoke clearly and her first thought was a complete sentence.

I am a part of my daughters’ compass, but they are also a part of mine.